skip to main | skip to sidebar

When's the last time you decided that you couldn't take your white toilet seat anymore and had to paint it? 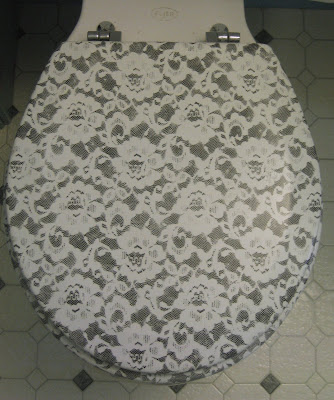 Me? over a year ago. BUT, I started it and never continued my mission. It had a smokey grey background which I intended on putting a design of maybe skulls or something fun. It never happened, therefore, it never got sealed, therefore...the paint started to wear off.

You know how you have something in your house that needs to be done? that looks terrible? but you become blind to it? well, that's what happened here. OK, I wasn't completely blind to it...actually, every time I looked at it I thought "I really have to do something about that." Then I became blind again. BUT I would remember again when someone came over (more often a person adopting a dog than a friend) and they'd ask to use the bathroom. My heart would sink. "um, sure, it's right over there." I can only imagine what they thought. It was clean, always clean, but it didn't look that way because it was so grunge looking.

So, finally the other day, I took it off to repaint.

Poor R. -- "hey babe? where's the toilet seat?" wellllllllllllllll....it'll be back in a day or two.

Each day he'd come home, "hmmm, there's still no toilet seat" "yeah, I know, I had a little issue, it'll be done in a day or two."

This went on for about a week. See....I started to repaint but the under layer of existing paint lifted...I had to scrape it all off. I guess Metal Primer REALLY isn't for prepainted pressed wood. So I started from the very beginning. Due to the humidity, it took forever for each coat to dry. I was using spray paint for the white and the clear coat and I put on about 4 clear coats because I fear it will wear off. The black is acrylic so that dried pretty quickly. 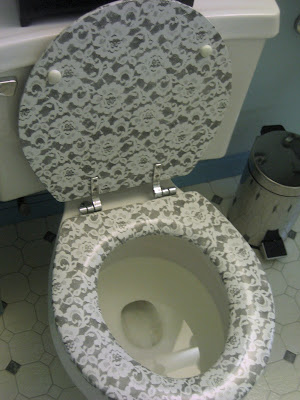 Finally, I get the seat on, R. comes home, I don't tell him what I've done, he goes into the bathroom to brush his teeth, and I hear, "you did this?" "yeah, why, no big deal, kind of cheating really because I needed to get it done." "YOU did this" he says. "Well, yeah, but you know I, it's no big deal, anyone can do it, it's been done before, it's not a new idea." "YOU did this?" He lifts the seat and sees that the underneath is painted, too.... "and the bottom, too?" "Mannnnnn" .....Ahhhh, one thing I love about him, easily impressed with something I do that I think is so unoriginal. 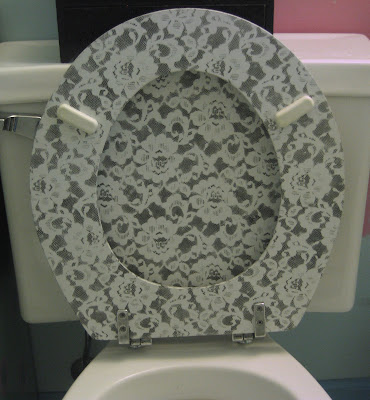 So I explained to him the simple process. Remove toilet seat. Spray with primer. (Although I used spray paint, it's what I had around. I would have used a brush and can of paint but I thought the finish would be better with spray, I wish I'd used the former - I typically don't like using spray because of the environmental issues) with that said....I then sprayed a white flat. I put spray glue on the back of a piece of lace, laid it on, cut it around and manipulated it to not distort, stenciled with a brush and black paint, then sprayed with a gloss clear coat.

He didn't think it was so simple, but it really is.

At first, I felt bad about copping out and not being more creative...plus, I'm not really a lace person, but then when it was done, I kept looking at it and was pretty happy with the look. It just felt right.

Now to do something with the rest of the bathroom! and who knows, next year it might be a different design on it. But for now, I like it.

I was thinking of going into the area of custom designed toilet seats and covers. I'm sure someone does it but that would be a lot of fun! Send me a seat that fits your toilet, or I'll pick one up that is the size you need, we'll chat about ideas, colors, styles existing in the bathroom....hee hee, what do you think???

Email ThisBlogThis!Share to TwitterShare to FacebookShare to Pinterest
Labels: before/after

Thanks for sharing your thoughts...

On behalf of my partner Shelly, and as co-owner of Schnauzer Paws Rescue, we'd like to thank each of you that has kindly donated to the rescue. It's these gifts that help us to be able to give extensive veterinary care to some of the dogs in great need that come into the rescue.

If you're a blogging, you know the drill....
In the blog world we can't help but want to make something similar to someone else, tell our blog followers about an item, artist, recipe, etc. It's part of what blogging is about.
If you use something from here, take a photo from here, or copy my words, please give them credit and link back to my blog.

go to my profile page for a (long) list of fun, creative and interesting blogs I follow.